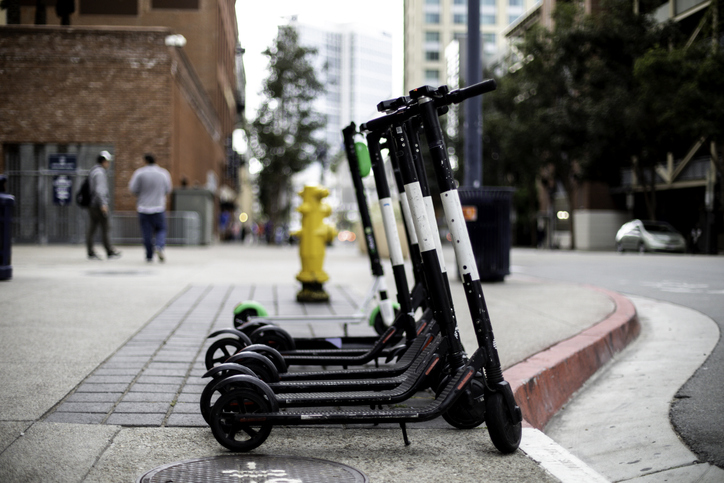 Every day, people who live and work in urban Texas areas use app-based electric scooters to get from one meeting to the next, grab lunch, or meet with friends after work. Others are less concerned about riding them as much as they are avoiding getting hit by them, stepping over them, and shaking their heads in frustration when they see a giant pile of them strewn across the sidewalk. There are limited state laws governing scooter usage, so its left up to cities to decide whether and how to govern app-based scooter companies, which is not an easy task.

There are limited state laws governing scooter usage, and whether they apply to a particular electric scooter depends on the device’s capabilities.

The Texas Transportation Code has a few laws that apply to “motor-assisted scooters,” defined as  a self-propelled device with (i) at least two wheels in contact with the ground during operation; (ii) a braking system; (iii) a gas or electric motor not exceeding 40 cubic centimeters; (iv) a deck designed to allow a person to stand or sit while operating the device; and (v) the ability to be propelled by human power alone.[1]

“Motor-assisted scooters” are allowed to operate on a sidewalk or a path set aside for the exclusive operation of bicycles and are prohibited from operating on roads where the speed limit exceeds 35 MPH.[2] A county or city may prohibit the operation of a motor-assisted scooter on a street, highway, or sidewalk if the prohibition is “necessary in the interest of safety.”

The Texas Transportation Code also has a few simple laws that apply to “electric personal assistive mobility devices,” defined as a two non-tandem wheeled device designed for transporting one person that is: (i) self-balancing; and (ii) propelled by an electric propulsion system with an average power of 750 watts or one horsepower.[3] Such devices are allowed to operate on a sidewalk[4] or a path set aside for the exclusive operation of bicycles. Electric personal assistive mobility devices are permitted to operate on a road where the speed limit is 30 MPH or less, but only when no sidewalk is available, when making a direct crossing, or when directed to do so by a traffic control device or law enforcement.[5]

During the 2019 legislative session—when scooter usage was booming—the Texas Senate passed a bill that would ban electric scooters on sidewalks, require users to be at least 16 years old, bar more than one rider per scooter at a time, impose strict parking requirements, and explicitly enable political subdivisions to impose even more rigorous standards. In the House, the bill stalled in the Transportation Committee and never made it to the floor for a vote.

Scooter usage fell sharply during the pandemic, and when a similar bill was introduced during the 2021 legislative session, it failed to receive a committee hearing or vote.

That doesn’t mean the state is done attempting to regulate scooters. Governor Abbott has thrown his support behind state regulation of scooters. In response to a video of a scooter rider on I-35 in Dallas, Governor Abbott tweeted: “That does it. I believe in less government. But allowing these scooters on crowded interstate highways is bad government and endangers public safety. Action is needed. #txlege.”

Given the Governor’s support, and the returning popularity of electric scooters, it’s likely another scooter bill will be considered by the Texas Legislature in 2023.

Since there are limited state laws governing scooter usage, its primarily left up to cities to decide whether and how to govern app-based scooter companies.

Before spring 2018, app-based electric scooters could be found in only a few cities on the west coast. In April 2018, after Bird and Lime unleashed their scooter fleets in Austin without the city’s prior approval, the City of Austin scrambled to create a “city-wide dockless transportation license” (Ordinance § 14-9-23).

In 2018 alone, seven licensed operators dropped more than 11,000 authorized scooters and 850 bikes in a 65-square mile service area in Austin.

“Half of people I run into have had near-death experiences with a scooter, and the other half of the city can’t imagine life without a scooter,” the Austin mayor said at a mobility committee meeting in February 2019. The same month, Austin recorded its first traffic death involving a rented scooter.

Since then, the City of Austin has fleshed out its ordinances and rules governing shared mobility devices and “micromobility” devices (scooters, skateboards, and other compact devices designed for personal mobility). Other Texas cities, including San Antonio and Corpus Christi, have adopted their own ordinances and policies regulating “dockless vehicles.”

The City of San Antonio established a pilot program for dockless vehicles in October 2018. During the pilot program, seven companies obtained permits to operate a total of 14,100 electric scooters and 2,000 electric bikes.

Following the pilot program, the City of San Antonio decided to limit the number of operators to three companies selected through a competitive bidding process. In December 2019, San Antonio offered two-year contracts to Bird, Razor, and Lime. Lime withdrew before the contract took effect in January 2020. Each company was permitted to deploy 1,000 scooters. In the summer of 2021, Bird asked the city for an increase to its allowed cap of scooters, but the city said no—or at least, not yet.

As high gas prices continue, electric scooters are poised to make a comeback across the state. The question is, will Texas cities be ready for them?